Indianapolis based team, Sarah Bradley Racing continues her winter racing into round 2 of the ROK Cup USA Florida Winter Tour again in sunny Miami Gardens, FL just outside of the Miami Dolphins Hard Rock Stadium. With many talented young drivers in the paddock the micro class is full of future talent that will be seen through the ranks as they continue their karting career. Sarah Bradley, able to make great strides through the course of the weekend with her driving, but on the mechanical side of things it was that of a roller coaster. However, this time around the track conditions were very different from the previous round. For some reason the track was much bumpier than before and it took a toll on both kart and driver. Also the weather conditions were also different wreaking havoc on engine performance. By halfway through the weekend, a third of the field had some sort of power/performance issue.

Heat one was a hard fought battle with a few of the drivers on track. Fighting for position this allowed the lead pack to slowly start to pull away and become unreachable with a draft after they started working together again with only a few laps to go until the checkered to finish Heat 1. This is about the time the power plant started to slow down and everything that supplies power and fuel to the engine was replaced.

On Saturday’s heat race two, the team decided to swap engines. The penalty was to have to start the remainder of the heat races in the back of the field. She showed better speed and race craft earning herself 6th position. Sarah making some great passes and avoiding crashes throughout the race on the start was key to her moving forward and improving her position on the race track.

Heat race three did not go in favor for Sarah, she was having a great deal of mechanical issues between the engine and rear axle that had come loose. Her speed through the corners as the brake was then dragging did not help her advance positions and she brought it across the finish line in eleventh place for this race.

As Sarah’s team was upset due to this circumstance, she was in good spirits and ready for the next day to prove that she could continue to stay in the top 10 or better. Sunday being the final race day Sarah knew that she was going to have her work cut out during these last Pre Final and Final races on track.

For the pre-final, Sarah started 9th and managed to pick up one spot finishing in 8th despite power issues.

Before the Final race, her team made a decision to switch back to the original engine which performed better and knowing the power issues we were having, it was not in the engine itself.
Sarah started started in p8 and stayed with the lead pack dicing it up for 10 laps before fading back finishing in 8th earning her respective top 10 position for the weekend.

Father and mechanic John Bradley states, “Positive attitude and determination prevails this weekend to bring home a solid top 10, finishing 8th despite the many set backs.”

Sarah Bradley Racing is in preparation for the next and final round of the Rok Cup USA Florida Winter Tour hosted at Ocala Gran Prix March 21-24th. Sarah has her sights set on achieving a top 5 finish at the event to conclude the winter season and gain some momentum leading into the following weekend event of the WKA Manufactures Cup Series Round 2 at GoPro Motorplex. Both tracks are new to Sarah as she has never driven them but she is confident in her ability to learn them and gain pace quickly. 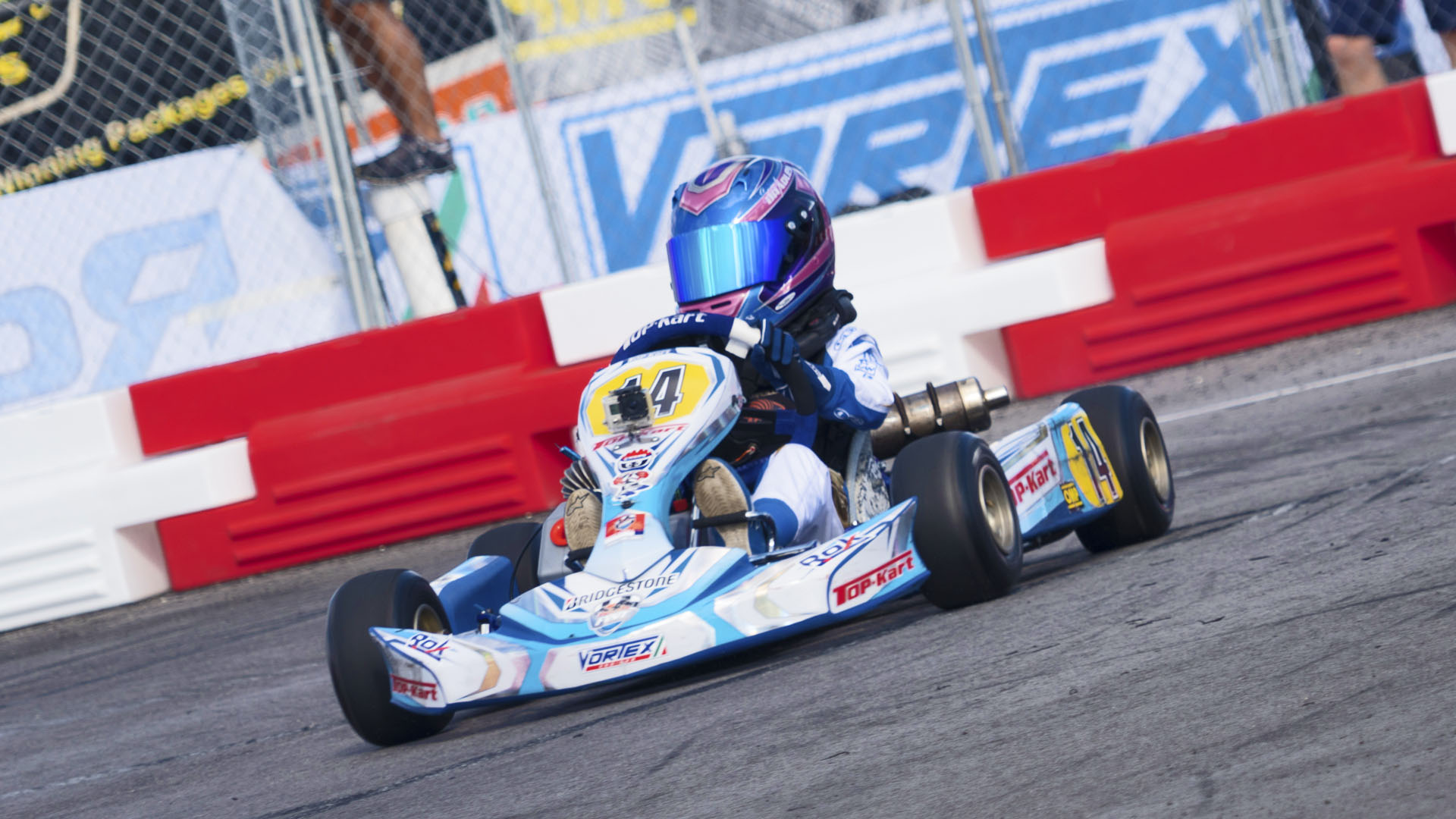